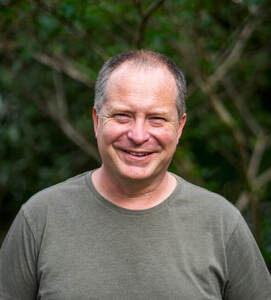 Rector: Sturt Young
​Sturt is the Senior Pastor at Barrenjoey Anglican Churches and the Interim Pastor at Mona Vale Anglican. He is married to Emma (since 1996) and has 3 children, Bryn, Tal and Anwyn.

Sturt spent most of his working life before full-time ministry in the IT industry. In 2005 he started studying at Moore Theological College in Sydney and in 2009 started an 8 year ministry at St James' Anglican Church, Turramurra.

​Sturt loves coffee, blues music and the relaxed northern beaches vibe. More than that, he loves Jesus and wants others to experience Jesus' love in their lives.

I have been a member of the Mona Vale Anglican Church family since 2009. I am married to Simon and have 2 kids, Katelyn and Andrew.

My journey of coming to Christ began in 2009 through the process of having my then 3 month old daughter baptised. Prior to that I hadn’t realised that knowing about God and knowing God were actually two very different things. It was the promises that I had made to God during that baptism ceremony that completely changed my life. I realised then and there that a person can lie to their family and friends, they can even lie to themselves but they can’t lie to God – because he always knows what you’re actually thinking and doing – even before you do! The most mind blowing thing for me is that God knows everything about us, yet he still loves us anyway. That is one incredible love.
During the baptism I had promised God that I would teach my kids about Him and to bring them up knowing Him and so began my incredible journey of faith which somehow found me here teaching the kids of Mona Vale Anglican all about Him.  I have experienced both a “knowing about God” and “knowing God” life and I definitely know which I flourish under and so it is my passion to be able to help kids get to really know God and what he wants for their lives because I know how great life is with Him in it.

I would love to meet you and your kids on Sundays @ 10am for Kids Church every Sunday morning during our family service.

Ministries Co-ordinator: Mark Corbett-Jones
​
I have been at St John’s since 1992. I have lived all my life on the Northern Beaches. I attended Sunday school till I was 9 and always considered myself a Christian. But in hindsight I was not because I was dealing with God on my terms not his. When I was 34 I returned to the church as a result of attending the Baptism Explained sessions with Rev. Ron Coleman. I realised the importance of the promises I was going to make and have been here ever since.

I worked as an IT professional for over 34 years. In my last role I also oversaw the company’s social engagement activity which brought me in contact with many fantastic charities including World Vision. I thought if ever I changed jobs, it would be great to do something with one of them – little did I know what was in store. In 2009 my company was looking to downsize, but rather than seek voluntary redundancy I left it in God’s hands. Three months later I was made redundant on a Thursday and on the following Sunday, St John’s announced a partnership with World Vision which just goes to show that God has a plan for us all.

I got married here at St John’s in 1989 to Sue and we have two boys – Ben age 30 who is a mechanical engineer and Shaun age 28 who works for a bank. I like surfing, skiing and playing golf.