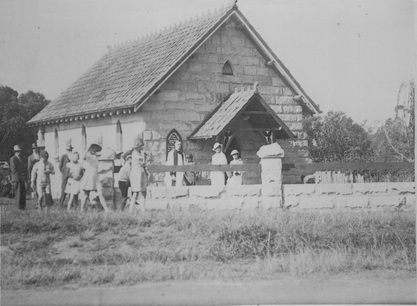 St John the Baptist Anglican Church Mona Vale is 148 years old. It is characterised by many years of faithful testimony to Christ by God’s people in and around Mona Vale. Church is about people living under the Lordship of Jesus and reaching others with the good news. Mona Vale Anglican has a reputation for faithful Bible teaching exercised by its teachers and leaders, and a community built around loving our fellow brothers and sisters over many years. The community that exists now is different to the one that existed 100 years ago, yet we continue in the same tradition, and we look forward to God’s continued grace amongst us as we grow together into the future.

Buildings, however, promote the fundamental business of church to grow Christians and bring others under the sound of the gospel. We thank God that he has given us pleasant and functional facilities to be on about the business of heaven. What follows below is an extract of our history at Mona Vale Anglican Church.

Mona Vale Anglican began its life when the rector from St Matthew’s Manly travelled to Barrenjoey lighthouse to conduct occasional services. He noted the growth of small villages in the area and the need for churches to be located within these new communities. St John’s became the first church to be built in the region and was opened on the 21st of September 1871. It was originally located on the hill overlooking Bongan Bongan beach. The rector could then travel from Manly to conduct services in the new church.

By 1881 residents had moved nearer the township of Mona Vale and so it was decided to move the church to Winnererremy Estate in Bayview Rd (now part of the golf course on Pittwater Rd). This was accomplished on a bullock wagon, which became bogged for 2 weeks before making it to the new site.

By 1906 the wooden church had deteriorated to such an extent that it had to be demolished and a small stone church was built on the present site and opened in 1907. Between the years of 1920 and 1952, Mona Vale Anglican belonged to the parish of Narrabeen, incorporating Narrabeen, Mona Vale, Newport, Avalon and Palm Beach.

In 1961 Mona Vale Anglican became the centre of Mona Vale provisional district (later Parish), and received its first resident minister. A rectory was built in Darley St at the rear of the church. The population continued to increase considerably with housing developments, and large business and industrial areas appearing.

In 1977 the Rev. Ron Coleman succeeded the Rev. D. Langshaw as Rector, and ministered faithfully for 22 years. The long hoped for extension to the 1907 small stone church was planned and built during this time. The opening and dedication took place on 10th Oct 1982. A new rectory was also built during this time in Kiah close, Bayview, being completed in Jan 1985.

In Nov 2000 the Rev John Reid was welcomed into the Parish as Rector. He continues to minister at Mona Vale Anglican encouraging God’s people to grow in their knowledge and love of the Lord Jesus while seeking to reach the lost with the good news of Jesus. Mona Vale Township is a large and growing community including large housing developments, several schools, and a number of retirement villages and nursing homes.

In 2004 a new family service was launched at Loquat Valley Anglican School by Warren Smith. It was relocated to Mona Vale Anglican Church before closing at the end of April 2007. The experience of starting this congregation taught us the importance of being a missional church. At the start of 2006 we launched a new congregation by Matthew Elkan which is now called 6pm Unplugged. It is comprised of young adults from Mona Vale Anglican. In the same year we started a fortnightly service at Minkara Retirement Resort and a monthly service at Seabeach Village, while the monthly service at George Mockler Retirement Village has continued for over 15 years.

In 2007 we launched Baptism Explained classes giving us the opportunity to form relationships with families enquiring about baptism for their children. The 10 am congregation that meets on a Sunday at Mona Vale Anglican is now the focus of our family ministry and the 8am congregation caters for a more traditional prayer book service. In the same year we formed a partnership with Anglicare to operate out of Mona Vale Anglican Church. Anglicare provides aged care for seniors over the course of the working week, and contact between the members of our church and those who attend Anglicare is growing.

In partnership with World Vision we have broadened our horizons about engaging with our community and culture. We helped expand a mentoring programme called “Kid’s Hope” into the Northern Territory by supporting churches in Darwin and Alice Springs to be involved. A growing number of members of Mona Vale Anglican are now Kid's Hope mentors in our local primary school. We also have a partnership with Nungalinya College in Darwin to care for and empower indigenous people. A team from our church visits Darwin each year in the June/July school holidays for a week where we serve them and assist in any way possible using the skills we have. In the past we have updated their website, designed buildings, catalogued their library books, gardening, building fences and disability ramps but most of all we have painted their building which is a constant need. The college now plans their maintenance activity for the year around our visit.

Mona Vale Anglican bears testimony to the faithful service and ministry of so many – from the early pioneers of 1871 who had the vision to build the first church in the area, and including all those who have had the privilege to serve faithfully over the past 140+ years. We give thanks to our great and powerful God who has blessed us so richly. We see our aim as making a difference for eternity – together.
For more information on the church and its history please contact us